Weird Stories for a Weirder World
​ 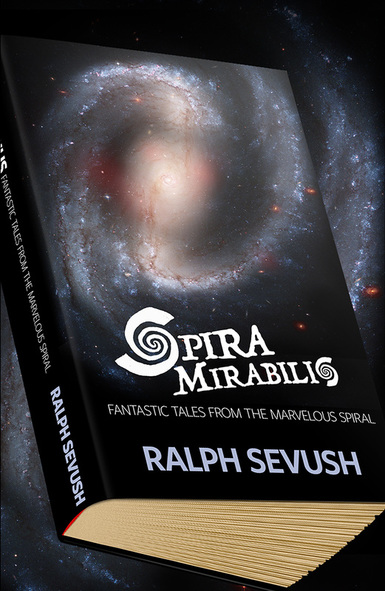 ​The tales in Spira Mirabilis employ a variety of storytelling techniques, styles, lengths and genres to re-invent a wide range of ancient myths and legends, including… a golem for hire, in a battle with an agent of God -- Picasso’s tragic bargain with a satyr in post-war France -- sex, bugs, and academia on the verge of the apocalypse -- Gilgamesh retold as a tall tale of the old west -- robot love and revenge on a mining asteroid -- a Japanese wizard, the A-Bomb and time travel after WW II’s Battle of Saipan -- a phoenix and an infant escaping from a dying world in a parallel universe, and -- Arthurian lore re-conceived as Lovecraftian horror, playing out  in our modern world.

Violent, funny, poignant and romantic, in varying proportions, these tales are also about the act of telling the story, and the storyteller, too.

"Spira Mirabilis," Latin for "marvelous spiral,” is the name given by mathematician Jakob Bernoulli to the logarithmic curve with a unique property: though the size of the spiral increases, its shape remains unchanged with each successive curve.  According to the author, “myths arise in different contexts throughout human history. They expand and evolve, yet, like the Spira Mirabilis, they remain essentially the same. And this is likely so because, despite our thin veneer of civilization, we haven’t changed all that much since we first emerged from the cave.”
​​​Praise for the ​SPIRA MIRABILIS collection:
​
“… leads readers on an imaginative tour of pulp genres and popular mythology. Overall, these stories are grand, world-building genre pieces... Sevush displays great facility with the rhythm and lexicon of the various styles he assays. A rollicking, good-spirited ride…”
-- Kirkus Reviews

​“Ralph Sevush's terrifically entertaining tales live somewhere between the classic pulp fiction of SF's Golden Age and
the 21st-century cutting edge of Gaiman and Gibson... smart, startling and memorable.”
-- David Auburn, Tony and Pulitzer Prize-winning playwright and screenwriter (Proof, The Columnist)​
​
﻿“Masterfully careening from fantasy to horror to science fiction, this memorable collection boasts sly references from Gilgamesh to Superman,
​but like all great storytellers, his literary prowess is always in service to his ultimate quest: to illuminate the human heart."
-- Doug Wright, Tony and Pulitzer Prize-winning playwright, librettist and screenwriter (I Am My Own Wife, Grey Gardens, Little Mermaid)
​
“This remarkable collection highlights a voice that will remind you why you fell in love with science fiction in the first place.
​From the gritty characters to the landscapes they inhabit, Ralph Sevush is a true “world builder,” calling on well-known tropes
and upending them ​with his own clever imagination.  One of my favorite pieces of genre fiction I’ve read this year… truly marvelous!”
-- Qui Nguyen, Playwright (Vietgone, She Fights Monsters), and Artistic Director of the off-Broadway theater company, Vampire Cowboys
​
These astonishing stories are as funny, lyrical and literary as they are original, big-hearted and human.
It’s as if some mad scientist has taken parts of Ray Bradbury, Neil Gaiman, Mickey Spillane, Ursula Le Guin and Edgar Allan Poe,
and sewn them all together to create something magnificent and wholly original."
-- David Lindsay-Abaire, Pulitzer Prize-winning playwright, librettist, lyricist and screenwriter (Rabbit Hole, Shrek the Musical)
​“9/10 rating… That’s some good stuff right there…not a bad story in the bunch [and some of them] still resonate. Recommended.”
--SF Reader.Com

“…the stories are experiments of mashing genre with myth…clever…interesting.”
​--Publishers Weekly